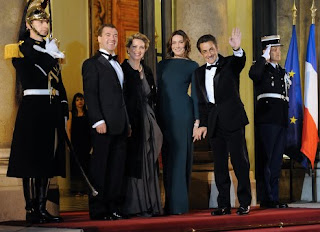 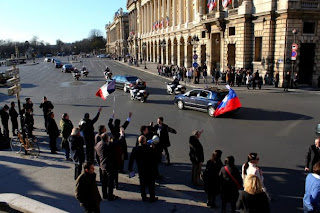 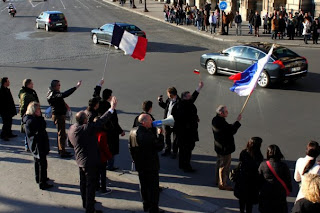 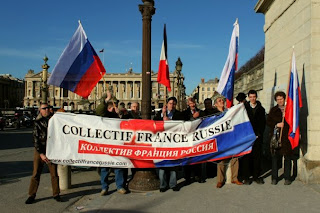 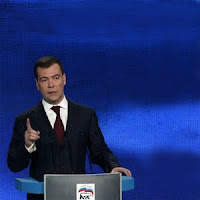 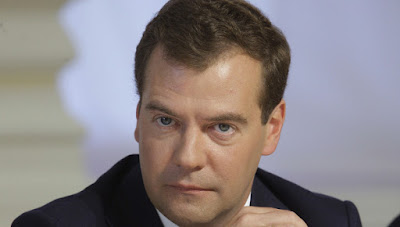 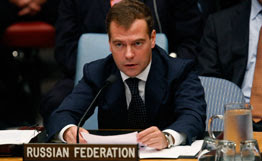 ” At the morning session the President of the United States spoke and I would like to support an idea brought up by Mr Barack Obama who said that no country is able or should try to dominate over other nations “.
” Russia, on its part, will continue to strengthen the mechanisms of regional interaction together with its partners across the CIS and within the framework of the SCO and BRIC. These mechanisms help respond collectively to common threats, and mitigate the consequences of the crisis for our peoples and increase the sustainability of national economies “.
” We are convinced that the use of force can only aggravate the situation. This was demonstrated by a reckless attempt of the Georgian authorities to resolve the problems in their relations with South Ossetia by military means. In August 2008, we came very close to seeing a local armed conflict grow into a full-scale war”.

” The Cold War is over, as we all believe, but the world has not become more secure. Today we need genuinely modern solutions. We also need clear legal framework for already existing political commitments. We need no declarations, or appeals, or empty talk, but really clear legal frameworks which will, among other points, strengthen one of the principles of the international law, the principle of not ensuring one’s own security at the expense of security of others“.

” We all share values that are rooted in the norms of morality, religions, customs and traditions. I am referring to essential concepts, such as the right to live, tolerance toward dissent, responsibility toward one’s family, charity and compassion. This is the basis both for individuals’ daily lives and for relations among states.”
” Next year we are going to celebrate the 65th anniversary of the end of the World War II… However, from time to time we see the neo-Nazi organisations rearing their head. Racial, national or ethnic crimes are being committed. Attempts are being made to whitewash the Nazism, to deny Holocaust, and to revise the decisions of the Nuremberg Tribunal.  I am convinced that the United Nations must make it a priority to firmly and jointly resist manifestations of neo-Nazism and attempts to revise the outcomes of World War II, which are enshrined in the UN Charter” .
” Ladies and gentlemen, the creation of the UN was one of the global community’s main achievements in the 20th century. This organisation and its fruitful work have become a symbol of the 20th century, which has no alternative. We have no right to forget that the UN possesses a unique international legitimacy. And we all must preserve and strengthen this shared wealth of the peoples of the world”.