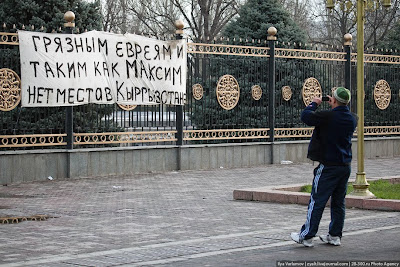 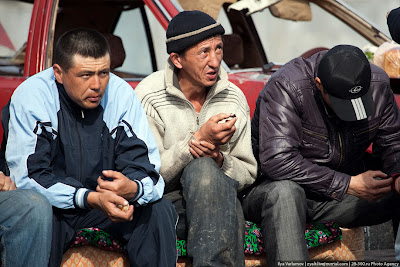 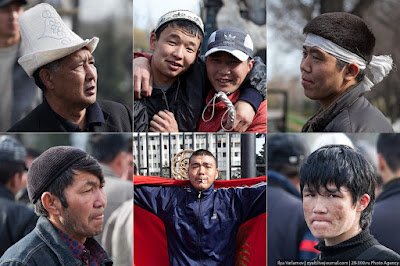 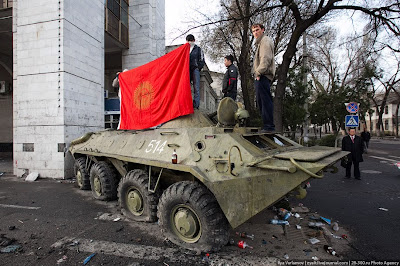 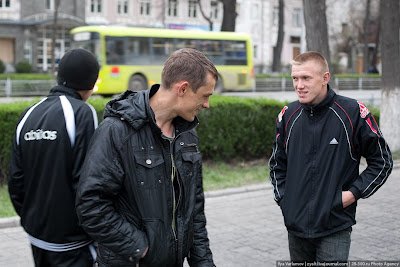 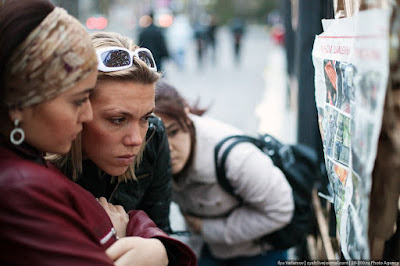 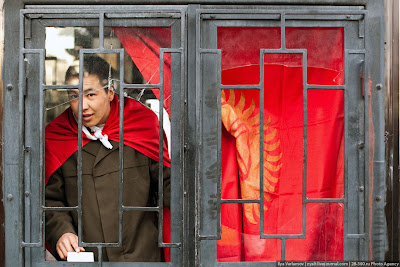 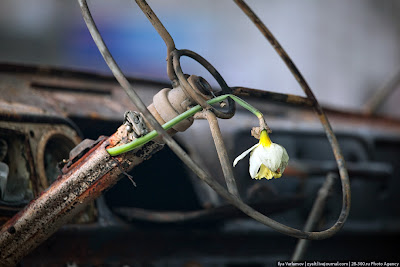 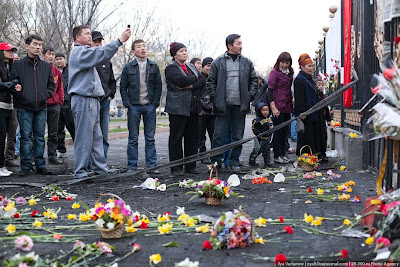 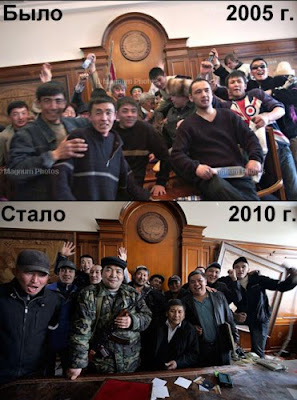 Kyrgyzstan’s self-proclaimed new leadership said on Thursday that Russia had helped to oust President Kurmanbek Bakiyev, and that they aimed to close a U.S. airbase that has irritated Moscow. Their comments set Wednesday’s overthrow of Mr. Bakiyev, who fled the capital Bishkek as crowds stormed government buildings, firmly in the context of superpower rivalry in Central Asia.

No sooner had presidents Barack Obama and Dmitry Medvedev signed an arms reduction pact in Prague as part of an effort to “reset” strained relations than a senior official in Mr. Medvedev’s delegation urged Kyrgyzstan’s new rulers to shut the base. The official, who declined to be named, noted that Mr. Bakiyev had not fulfilled a promise to shut the Manas airbase, which the United States uses to supply NATO troops in Afghanistan. He said there should be only one base in Kyrgyzstan – a Russian one.
Omurbek Tekebayev, a former Kyrgyz opposition leader who took charge of constitutional matters in the new government, said that “Russia played its role in ousting Bakiyev”.  “You’ve seen the level of Russia’s joy when they saw Bakiyev gone,” he told Reuters. “So now there is a high probability that the duration of the U.S. air base’s presence in Kyrgyzstan will be shortened.” Russian Prime Minister Vladimir Putin denied that Moscow had played a part in the turmoil in the former Soviet republic, which Russia regards as part of its own back yard. But he was the first foreign leader to recognize opposition figure Roza Otunbayeva as leader of Kyrgyzstan, and telephoned her soon after she said she was in charge. The United States said it had not yet decided whether to recognize Ms. Otunbayeva’s government, and did not say who it believed was in control.
Russia’s top general said 150 paratroopers had been sent to Russia’s own Kant base in Kyrgyzstan, and Mr. Medvedev’s office said they would protect Russian citizens at its embassy and other diplomatic facilities. Ms. Otunbayeva, who once served as Mr. Bakiyev’s foreign minister, said the interim government controlled the whole country except for Mr. Bakiyev’s power base of Osh and Jalalabad in the south, and had the backing of the armed forces and border guards. She said the situation in Kyrgyzstan’s economy was “fairly alarming” and it would need foreign aid. She said Mr. Putin had asked how Russia could help.  “We agreed that my first deputy and the republic’s former prime minister, Almaz Atambayev, would fly to Moscow and formulate our needs,” she told Russian Ekho Moskvy radio. Mr. Putin did not promise a specific sum, she said. “But the fact that he called, spoke nicely, went into detail, asked about details – generally, I was moved by that. It is a signal.”
Ms. Otunbayeva said Mr. Bakiyev was holed up in Jalalabad. “What we did yesterday was our answer to the repression and tyranny against the people by the Bakiyev regime,” she told reporters.
Kyrgyzstan, a country of 5.3 million people, has few natural resources but has made the most of its position at the intersection of Russian, U.S. and Chinese spheres of influence.
Washington has used Manas to supply U.S.-led NATO forces fighting Taliban insurgents in Afghanistan since losing similar facilities in Uzbekistan, apparently after pressure from Moscow.
Mr. Bakiyev announced the Manas base would close during a visit to Moscow last year at which he secured $2-billion (U.S.) in crisis aid, only to agree later to keep it open at a higher rent. The U.S. chargé d’affaires in Bishkek met Ms. Otunbayeva, while in Washington a top U.S. diplomat received Mr. Bakiyev’s foreign minister, Kadyrbek Sarbayev. “Our message to both is the same,” State Department spokesman P.J. Crowley told a news briefing. “We will continue to urge them to resolve this in a peaceful way.”
Michael McFaul, a senior White House adviser on Russia told reporters in Prague: “This is not some anti-American coup. That we know for sure, and this is not a sponsored-by-the-Russians coup.”
He said Mr. Medvedev and Mr. Obama had not discussed the base. A U.S. official said they had considered making a joint statement on Kyrgyzstan, but none was issued. Bishkek awoke to blazing cars and burned-out shops on Thursday after a day in which at least 75 people were killed. The Pentagon said limited operations were continuing at Manas, and support to Afghanistan had not been seriously harmed. Pentagon officials say Manas has been central to the war effort, allowing around-the-clock combat airlifts and airdrops, medical evacuation and aerial refuelling, and that alternative solutions would be less efficient and more expensive.
Mr. Bakiyev, himself brought to power by a “people power” revolution in 2005, told Reuters by telephone that he had no plans to step down, but offered to talk to the opposition leaders who have claimed control of Kyrgyzstan. “I can’t say that Russia is behind this,” he said. “I don’t want to say that – I just don’t want to believe it.”  Speaking to Russia’s Ekho Moskvy radio, he acknowledged that he had little control over events in the capital. With rioters roaming the streets and widespread looting after a day in which dozens were killed in clashes between protesters and police, the self-proclaimed new interior minister ordered security forces to fire on looters.
Smoke billowed from the seven-storey White House, the main seat of government, as crowds rampaged through it. Looting was widespread and shots could still be heard on Thursday night. The uprising was sparked by discontent over corruption, nepotism and rising utility prices. A third of the population live below the poverty line. Remittances from the 800,000 Kyrgyz working in Russia make up about 40 per cent of Kyrgyzstan’s GDP.
Another 10 per cent or so comes from the giant Kumtor gold mine, operated by Canada’s Centerra Gold.  Centerra said operations were unaffected by the turmoil, but its shares were down around 5 per cent on the day, following an 11 per cent fall on Wednesday.
09 04 2010
Un lecteur me demandait ce que je pensais des évènements, ma réponse est qu’Il est difficile d’en tirer les grandes conclusions .. Mais enfin on peut se réjouir :
– fin d’un autre régime Orange .. C’est un symbole .. 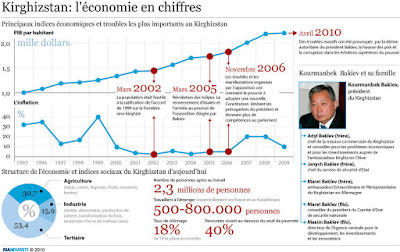 Oleg Kozlovsky, an activist with the Oborona youth movement : “With such methods they will hardly achieve anything better,” he wrote on his Twitter blog.
Speaking to The Moscow Times, he said he was disappointed to see the violence and looting. “These protests are more like spontaneous riots than an organized regime change. This is not what happened in Ukraine,” he said.
**
Oborona, petit frère de OTPOR qui se plaint des méthodes de son grand frère ..  On aura tout lu non ?