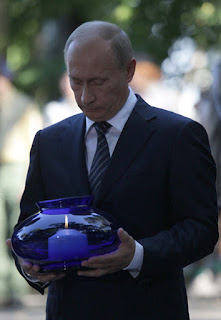 “Victory over Nazism came at a huge price and at the cost of irreparable losses. More than 53,000 Red Army soldiers and officers died liberating Gdansk alone. Buried in Poland are 600,000 of my fellow countrymen who contributed to the victory over Nazism. All in all, half of the 55 million who died in the Second World War were citizens of the USSR. Think about these terrible figures“.

“The Second World War did not just happen. Its sources lie – and I agree with those who have made this point today – in the dire legacy of the Versailles Treaty, which did not only document the defeat of Germany after the First World War, but humiliated it, a fact that the Nazis took advantage of in order to seize power in the mid-1930s. “

“ Of course, mistakes have to be admitted. Our country has done so. The State Duma of the Russian Federation, our country’s Parliament, has condemned the Molotov-Ribbentrop Pact.”

” Without a profound understanding of what has happened, we will be unable to build a truly secure world, eradicate the legacy of the Cold War, and remove the artificial dividing lines.”

” I would like to note that my country does not only recognize the mistakes and tragedies of the past, but is making a practical contribution to building a new world based on new principles.”

“An example of how old wounds can be healed – I am confident of this today – is the relationship of true partnership between the Federal Republic of Germany and the new Russia that has taken shape in recent years“.

” In conclusion I would like to address the main participants in today’s ceremony, the comrades-in-arms of those who defended Westerplatte and Stalingrad, landed in Italy and Normandy, and liberated Warsaw, Paris, Prague and Berlin. Your feat is immortal. It will remain forever in our hearts as a true measure of fortitude, courage, valour and honour.”