“Commentary on the last presidential elections in Russia March 2nd has been unequivocal – “absence of democracy”; “opposition stifled”; “a drift toward a single party”; “a return to Stalinist practices”, and so on. These accusations have made the rounds of television and newspapers as well as the numerous blogs dealing with Russia. Still, Dmitry Medvedev’s results reflect the evolution (maturing) of a coherent, stable electorate rooted in 1991; the year which marked the inauguration of universal suffrage, the collapse of the USSR – but also the year in which Boris Yeltsin was elected Russia’s first president! Indeed, Russia is a young and vigorous sovereign democracy!
Explanation: the Western political checkerboard does not have anything like the same form as the Russian. The West European or Anglo-Saxon checkerboard is marked by pronounced dualisms, generally an opposition of “right-left” or “centrists-extremists”, seen eventually as “liberal parties – non-liberal parties”.  The organizational form of this political gameboard totally excludes alliances between parties of the right and left, or of centrists and extremists; you might say the political partitioning is clear-cut and does not allow for “surprises”. This political organization is that of the United States (Democrats versus Republicans) or European countries (Right versus Left as well as existence of extremist parties)…this dualism does not exist in modern, post-communist Russia.
The Russian political board is itself comprised of a number of parties, very varied but on the whole gathered in three concentric circles, as a function of their type (nature) more than of the ideas they advocate.
The first circle, called the “central
An “outer circle” is comprised of opposition parties who have a solid electoral base in Russia, high scores and which surrounds the “inner circle” on the spectrum. Two most visible are the Popular Democratic Union of Russia (or Communist Party of Russia, more to the left of the political spectrum), and the Liberal Democratic Party of Russia (neo-imperial, and more to the right of the spectrum). However, there are many others, notably a party of entrepreneurs, a leftist nationalist party…but in 2005 they joined the United Russia coalition of president Vladimir Putin. It must be noted that in 1991 and 1996, the Popular Patriotic Union of Russia candidate (Gennady Zyuganov) polled equally with President Yeltsin, who was seeking a second term, this before his election gained the votes of Alexander Lebed’s supporters. Finally, in 1993, The Liberal Democratic Party of Russia (led by Vladimir Zhirinovsky) gained nearly a quarter of the vote in the parliamentary elections, becoming the first (opposition) political party to sit in the Duma.
Finally, there is a “marginal (extreme outer) circle” composed of a quite heterogeneous mixture of parties that includes ultra-radical and extremist parties as “liberals”.  Among those regularly present at elections of the past 15 years, one could mention the “Agrarian Party”, “Yabloko”, the “Union of Right Forces”, the “Party of Regions” and various independents. 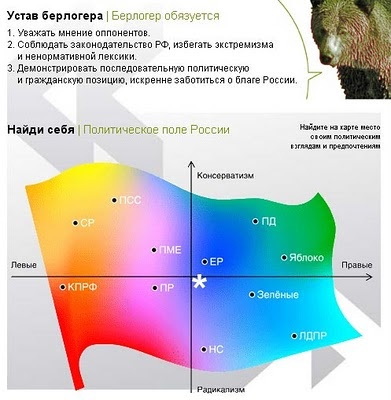 Informed commenters, usually westerners, should give up on this so-called “liberal opposition”.  These generally westward-looking parties have seen their electoral base slowly but steadily decrease since 1991, when some of them occupied important positions in the Yeltsin government, with obvious results…their electoral weight was about 12% in the 1993 elections, 7% in the elections of 1995 and 1999, 4% in 2003 and 2% in 2006 (compared with 1.5% for the liberal presidential election candidate last March 2nd).  Yet another often-heard explanation for this electoral erosion is that “Russians don’t want to be Democrats”, or “The Kremlin censors all opposition”…indeed, these “opposition parties” have coalesced in an interesting alliance that might be called the “Disagreement Alliance”, led by two men with totally different profiles (personalities), Garry Kasparov and E. Limonov. This alliance, based on anti-Putinism, repackages a lot of associations and parties that you’ll find here, plays the media internal-destabilization card (deliberate organization of protests in front of foreign cameras, demonstrations which deteriorate only once legally refused by municipalities, etc, etc…).  Add to this Mr. Kasparov’s deliberate speech in English, and one might ask who were its real targets. Externally, these movements play on the sensitive heartstrings of the EU (human rights violations) and America (support for Orange revolutions, taking of anti-Russian stances on the Caucasus and Central Asia).
It’s a strange supposedly liberal opposition, composed of the shaven skulls of the GNP, a longing for the gulag, former convicted dissidents (such as Limonov, who is of French nationality), political associations financed by NGO’s and American Democrat George Soros’s network and leaders of American think tanks who make speeches… in English in the heart of Moscow! You really have to ask why the West concentrates so much attention on parties that are struggling to gain the legal recognition of Russian political parties, and which represent only a tiny minority of the immense Russian civil society, which is itself very active. The fact that Edward Limonov is French and Garry Kasparov is a regular guest before the TV trays of America is perhaps the beginning of an explanation…Nonetheless, some day someone should explain to Kasparov that it is Russians who must be convinced, and not the Americans and the Europeans predisposed by the atmosphere of Kremlinophobia. It is noteworthy that the two primary opposition parties have refused to join “Other Russia”, so as not to mix with undemocratic and violent elements therein, it is the party of  “Yabloko”, and the Union of Right Forces”. For the great majority of Russians in search of stability and order (after the tumult of the 90’s), this is anything but serious and overall, anything but credible. It must be reemphasized that the title “liberal” in today’s Russia means “pro-western”, which is overtly criticized since 1991 and the chaos of Yeltsin and his ministers – who often presented themselves as “reformist/liberal” – has been assimilated by the Russian collective unconsciousness as “liberalization”, “economic pillaging” and “social chaos”. In summary, if Kasparov and his cohorts are the pillars of “opposition”, it is only for westerners, as they remain relatively little known in Russia. But that is to be expected if one campaigns in English in front of the TV trays of western countries; it is difficult to be heard by the Russian people but easy to masquerade as the poet of democracy for the complicit presenters and ignorant spectators. It is noteworthy that lying only works for westerners as a strong feeling (and only at home) that the scores of foreign candidates for the Kremlin (German, French, English, UK..) are generally highly regarded in Russia.
It’s hard to believe that the ballot-boxes are stuffed in consulates, yet the voices of Russian voters living in these “civilized, free and democratic” countries tend naturally toward the Kremlin parties. Something to think about…