We’ve seen that the revolutionary propaganda was largely waged through the social networks in the Internet. Since 2008 and throughout the first mass strike organized in Egypt, Facebook and blogs have been widely used to instigate the protest sentiments, inform about the meeting spots of demonstrators and broadcast the news from the site of action. Then an idea, how to overcome their compatriots’ fear to act, occurred to activists: it was necessary to collect a million of Egyptian signatures for the petition for democratic reforms. Signatures were collected at the web-site with excessive security measures and located in the USA, where the petitioners had to leave their personal data, including the passport number, telephone and e-mail. Generally speaking, this was an ideal way of creating a database. As Sherif Mansour from Freedom House put it later: «The idea was to show million citizens that they have risk-free way of interfering with the politics». On the 6th   of June, 2010 yet another event launched the enlivening of revolutionary activity in the Internet. Blogger Khaled Sayid used Internet from a café in Alexandria to post a video, exposing corruption. Police arrested and tortured him.

April 6 Movement used this detention to create the Facebook page «We are all Khaled Sayid». Due to security reasons the page had at least three administrators, who remained anonymous until the revolution started: one of them was a 25-year-old journalist from Cairo, another one —
a Washington-based activist and the third one — Google department marketing manager from Dubai Wael Ghonim, who later became famous. Curious alliance, coordinated from the the USA through the NGO Freedom House and Internet-corporations (Facebook and Google).

Case of a  phony blogger, who introduced himself as a Syrian Lesbian named Amina, allegedly arrested in Damascus, became an example of an attempt of the foreign intervention into the domestic affairs of the country. Fake kidnapping of a girl by the Syrian police has mobilized numerous bloggers, a group of support for the allegedly arrested girl was created on Facebook — within some days 15 thousand people have joined the group. Soon, however, some bloggers decided to double-check the information. They’ve searched the Yahoo forums, which Amina participated and the U.S. addresses, where she allegedly resided, also the IP-addresses and finally discovered an address in Georgia (USA), which belonged to Thomas McMaster and his wife Britta Froelicher.

At first, a couple denied everything but finally admitted the forgery, claiming that they did it out of humanitarian motives. In fact Tom is an American activist, interested in the Middle Eastern policy, while his wife Britta writes a thesis on…Syrian economy. However, when the bloggers, conducting the  Internet investigation contacted them, a couple was temporarily in Turkey (which neighbors Syria), where they’ve «spent the vacation».

On the 16 th of May this year, April 6 Movement organized the first sitting with the members of Serbian Otpor for Sudan, where the activity of youth movement starts, following the example of other countries, in the Egyptian capital — Cairo. Like Otpor once did, Egyptian April 6 Movement decided not to become a party, putting forth its candidates. Just like Serbs, today Egyptian activists are training future revolutionaries. They maintain connections with young Algerians, Syrians, Yemenites, Moroccans, Libyans, and Iranians  etc.

Vanguard of the Egyptian revolution passed the baton. Although the uprisings started from Tunisia, it was Egypt, where they’ve achieved the
result in the shortest time. It’s easy to recognize Serbian-Egyptian Orange influence in the symbols that the groups, acting in the other Arab countries, used: 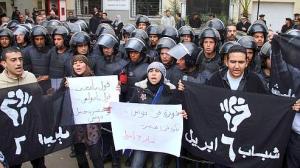 Saudi Arabia hasn’t escaped these movements either. As we may see below, the very same well-recognizable symbols are used to call for the
demonstrations. 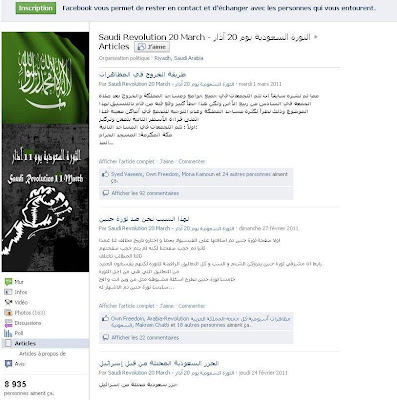 Internet propaganda that involved the Saudi kingdom has also been spread by such social networks like Facebook, but the most part of messages
were sent from abroad — from the other Arab countries, as Anwar Eshki (Director of the Middle-Eastern Centre for Legal and Strategic Studies)
and human rights activist Fouad al-Farhan confirmed. Besides, Saudi living standards are already not that bad as in other Arab countries,
because it is a rich country and the unemployment rate there is less than 10%. This was exactly the reason that conditioned the failure
of the protest movement. It was harder to mobilize the youth and, besides, the authorities reacted quicker and paid professional bloggers
for organizing a mass counter-propaganda in the web. Therefore, for now Saudi Arabia along with Russia, Belarus, China, Iran and Moldavia makes a group of countries, which weren’t destabilized by the organized agitation.