In the beginning of this year national unrest took place in quite a number of Arab countries, which the
world media presented as the chaotic protests of population, willing to break free from decrepit and corrupted leaders. These events were shown us as a kind of revolution, demonstrating people’s crave for democracy and their desire to fully join the modern and progressive trends.

There’s a direct connection of these manifestos to the Eurasian events of the last decade. In the due time the majority of media resources also presented those events as the democratic revolutions, while the population was willing to get done with the Soviet past in order to join the Western system, which synonyms are: freedom, democracy and progress. Nevertheless, today we know that those revolutions, dubbed the «Color» ones weren’t anything but chaotic and independent — they rather truly were democratic coups, funded from without and being a part of strictly appointed geopolitical objectives, aimed at allowing the dominating power (the USA) to keep its presence and control
in Eurasia.

Internet, non-violent ways of fight and the Western influence

Recent events that struck the Arab-Muslim world and known as the Arab Spring was largely initiated from abroad — just like not so distant Eurasian events (in Ukraine, Serbia, Georgia). Lack of organization and the state of their relative weakness allowed these revolutions to happen, but it wasn’t possible everywhere:
remember Belarus or Russia.

Arab Spring started in December of 2010 in Tunisia and then spread to other Muslim countries: Algeria, Jordan, Mauritania, Oman, Yemen, Saudi Arabia, Lebanon, Egypt, Syria, Palestine, Morocco, Sudan, Djibouti, Bahrain, Iraq, Libya, Somali and Kuwait. Outside of the Arab world protest wave also touched Northern Cyprus (its Turkish part) and Iran. All in all, 22 countries have been touched by the unrest to the various degrees — its participants stood up against dictatorship, corruption, poverty, tough actions of authorities and also against the rise of the food prices. Some of those revolutions have made the state leaders step down (Tunisia, Egypt), others — to the civil wars (Libya, Yemen). In certain cases turmoil turned into inter-clannish clashed (Syria) or the religious conflict between Shiites and Sunni (Bahrain). Finally, the Egyptian situation remains uneasy until now.
Given the prospect of election in the end of the year, it seems that the country is about to once again face the


logical stand of the secular and radically-Islamist
political blocs.

Generally speaking, 6 months after the events started neither revolution led to an improvement of the state situation, albeit King of Morocco agreed to carry out certain constitutional reforms at once. New economic troubles shimmered beyond the mirage of democracy in most part of the countries touched by the Arab Spring, while civil wars have started in the others. Already certaincommon features have been revealed, allowing us to draw the parallels with the color revolutions in Eurasia. At first some of these movements were inspired by the non-violent resistance techniques, which or Ukrainian Pora). Moreover, since 2008 certain Arab revolutionary leader have straightforwardly applied to services of those movements — to the Serbian Otpor, precisely speaking, which proves that the people’s uprising was anything but chaotic. Finally, the geopolitical influence of America, which exerted extra pressure over the Muslim world after the events of 9/11, casts its shadow over the event through a web of the NGOs, which funded certain color revolutions.

American influence may be sensed even now, because America has started the new Great Game against Russia and China in this part of planet. In 2003 the U.S. government declassified the design of a new large project of total border re-division in this area — this project was named «The Greater Middle East».
Finally, the use of Internet makes up yet another common feature of these revolutions — or Revolutions 2.0 as they’re dubbed — because the social networks happened to be one the key means used.

Everything started in Tunisia but it was Egypt where the ties and similarities of the Arab Spring and the «color revolutions» became really obvious. In spring of 2008 the April 6 Movement was organized
in Egypt — in was intended to support the workers from industrial cities (El-Mahalla El-Kubra), which scheduled the strike for the 6th of April, the same year. The strike succeeded and President Mubarak was forced to raise the laborers’ wages. After those events both masterminds of the movement — Ahmed Maher and Israa Abdel Fattah — were
imprisoned. In December of 2008 Mohamed Adel, responsible for the media relations of the April 6 Movement, was sent to the USA, where he met the MPs and partisan functionaries, who advised him securing his organization in the Internet. The ready-made web-site of this organization will play the key role of the Egyptian events in 2011. April 6 Movement site reproduces the imaged of a lifted fist, which is a logo of the youth movements that became the vanguard
of «color revolutions». Take a look yourself: 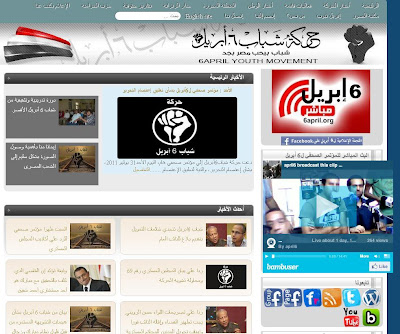 In Serbia during the anti-Milošević
revolution: 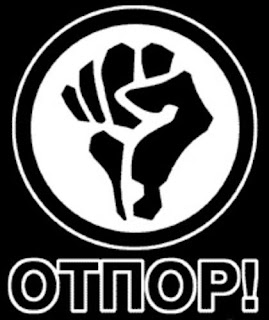 Facebook page of the Egyptian April 6 movement also features that logo. What miracle brought it there? 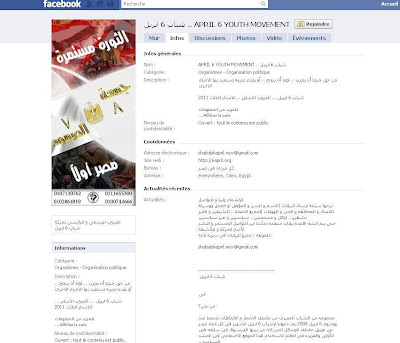 
Members of the April 6 Committee used to tell that soon they’ve contacted the web-site of Egyptians, extradited to Qatar, called the Academy of Change and engaged in the promotion of the state transformation ideas. Academy became a copycat of the Otpor techniques at once. What links Otpor, Milošević and the Arab world?


Let’s get a decade back and remember that the Serbian resistance movement
Otpor was remotely created, funded and guided by the USA through various NGOs like Freedom House, Albert Einstein Institute and the International Republican Institute. In order to make sure of that it only takes readingthis interview of one of the Otpor founders, who explains the tight connection of American government and this youth movement. Throughout the 2000s Serbian border police has been registering an extraordinary flow of young Serbs to the Serbian St. Andrew monastery in Hungary for several months. In fact, all these people were expected in the Budapest Hilton hotel, where the retired American Colonel Robert Helvy taught them the most advanced non-violent techniques, based at Gene Sharp’s doctrines.
Milja Jovanović, who got the MTV Free Your Mind award on behalf of Otpor, said that the European Union pretended to be deaf to their calls for help: «‘Send the appropriate application to Brussels and you will get the reply within6–8 months’ they said».
The USA, however sent the financial aid, required for opening 70 branch offices of the movement all over Serbia, within two weeks. Development of this underground revolutionary network and Otpor actions have led to the fall of regime of Milošević.

After the regime change in Serbia, Otpor transformed in CANVAS 1 — sort of a brain tank for the democracy-promoting activists. Today the Institute is mostly funded by Slobodan Dinovic — co-founder of Otpor and a Srdja Popovic’s friend, who headed the telecommunication enterprise after the fall of Serbian regime. CANVAS claims that it wages its activity (workshops, education, and training) in 37 countries and that it only cooperates with the
movement that have never conducted violent actions.

So, CANVAS, for example, refused to deal with Hamas and Hezbollah, but rather actively supported oppositionists in Iran, Zimbabwe, Venezuela, Belarus, Myanmar and Tunisia and Egypt before that.

Srdja Popovic claims: «It took Gandhi thirty years to depose the regime. We only needed ten years. Tunisians did that in a month and a half, Egyptians — in 19 days. CANVAS also openly takes part in the workshops, funded by the OSCE, UN and the Freedom House. When, after the fall of Milošević, Otpor publicized the fact of their support by Americans, many embers of the movement decided that they were deceived and left it — today it consists of merely 5 employees, revolution waging consultants, who take money for their services and
inform the American government. According to the CANVAS founder, «previously America assisted anyone opposing Milošević». Today’s list of official sponsors of the organizationsleaves no place for doubts of its political orientation.

Let’s get back to the Academy of Change, though. As one of its members, Basem Fathy, admits, the academy works with a variety
of progressive Arab movements, is financed right from the USA and deals with the human rights protection
founded in an Islamic country, yet is the U.S. ally, will hardly be more surprising than its field of operation. During the Serbian events, which led to the collapse of regime of Milošević, disproval of election results by one of the NGOs observing them (Center for Free Elections and Democracy) was one of the things that triggered the street revolution.

Similar mechanism, 100%-funded by the American
National Endowment for Democracy NGO operated in the Arab world. We’re talking about the U-Shahid web-site. Members of the Qatar-founded academy, replied positively to the request of their compatriots, sent through the Facebook and established their contact with the Otpor (today’s CANVAS). Then two Otpor leaders Srdja Popovic and Ivan Marovic passed theoperational documents to them.

In June of 2009 CANVAS created by Otpor organized a colloquium on Egypt. Mohamed Adel and blogger Esraa Abdel Fattah, responsible for the media PR of the Movement of the 6 th of April, have even been sent to a two-week-long study course to Belgrade. In Belgrade they’ve joined other young Arabs from Egypt, Tunisia, Algeria and Morocco, who came to Serbia in order to attend the CANVAS classes.

Besides, leaders of the International Non-Violent Conflict Center organized the training of activists and bloggers directly at the place of action, in Egypt, teaching them the way of non-violent revolutions and distributing Gene Sharp’s textbook, describing 198 non-violent actions — one may find out the details at the web-site of the Albert Einstein Institute.

Gene Sharp’s textbook, translated to  Arab started to spread all over the Internet and during the anti-Mubarak rallies in Egypt it was downloaded more than 17 thousand times. One may get acquainted with various how-to guides for rallies and street demonstrations in Arab here and here. Al-Jazeera directed a quite educative documentary about this well-planned revolution that struck Egypt.

2 Responses to Battle for the east (1)