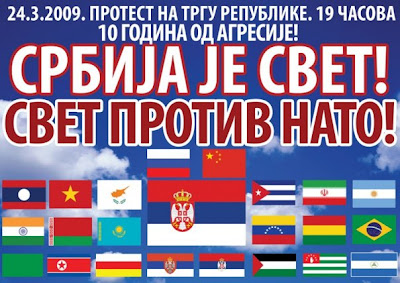 It is an honour for me, to write to you, from Moscow!

In a couple of days, we will be the 24th March 2009, a tragic day, as 10 years ago, a military coalition of the most powerful countries of the planet, federated through NATO, started a military bombing campaign of 78 days on Serbia, your Serbia.

Officially, this military operation has been set off in order to stop the ‘’slaughters’’, or should I say the so-called on going genocide supposedly taking place in Kosovo. Do you know that in France, the number of one million dead people has been quoted on the television news?

Unofficially, we all know very well why NATO has bombed Serbia: because it was the only worthy European State, the only sovereign and free State, the only State that did not bend in front of the liberal Atlantist diktat. The only State, that resisted the NATO spreading to the East.

With this campaign, were we told though, that we would stop the Kosovo genocide and we would make Serbia a ‘’democratic’’ and ‘’free’’ State, ready to integrate the European Union. To tell the truth, Serbia would become a State controlled by a government of poodles, themselves obeying Brussels and indirectly, Pentagon. Serbia would be come a state that would have to sell its patriots and its heroes.

10 years later, Serbia still, has not integrated the European Union. Even better, the ones who did an outcry for this so called genocide have divided the country. They recreated its borders, just like they had recreated the borders of their ex-colonies in Africa and in Asia.

They tore from Serbia, what was its most precious treasure: its heart!

Effectively, since a bit more than a year now, Kosovo would have become a so called ‘’independent state’’, acknowledged by the majority of the NATO countries (the countries that bombed Serbia) and their new freed allies: Iraq and Afghanistan.

Can we imagine any organism, be functional without its heart?

For NATO, in the name of International Law, this is possible. NATO has given birth to a monster, a lawless area where churches burn, where people are murdered because of their race and their religion, a little like in Rwanda, but in the heart of Europe.

The same way, those powerful nations have created the International Criminal Tribunal for the Former Yugoslavia, in order to mete out.

This ersatz of tribunal is the perfect reflection of the society it is supposed to represent. It judges and condemns people because of their race and religion and it murders some defendants without even they could go through a trial.

A very bright commentator (Arnaud Borella) was saying the following: ‘’ Do people know that Kosovo is slowly being monopolized by Albania? Do people know that Albania has given the free use of its Shengjin harbour located in the North of its territory, to Kosovo?

Do people know that the telephone prefix of Kosovo will not be the one of Serbia (+381) but the one of Albania (+355)?

I am not sure either that people know, that the customs between Kosovo and Albania have been abolished, while in the meantime the local KFOR reinforced custom duties between Serbia and Northern Kosovo.

This is the result of 10 years of American interference in the heart of our Europe.

I was recently reading this amazing history occurring in a Swedish zoo. The employees of the zoo said that one of their monkeys, probably more intelligent than the others, was preparing projectiles that it aligned in its cage and threw at the tourists coming too close.

The zoo employees, though very surprised by the highly technical gesture of the poor animal, said to have found the solution: The monkey will be castrated and therefore will become more docile.

This is exactly what NATO has tried to do in Serbia: a castration. The real genocide lies here.

In March 2009, the world can conclude by himself, what Kosovo has become: an occupied province stained with impoverished uranium, an occupied province in the hands of mafia groups cleared by the International Criminal Tribunal for Former Yugoslavia, now free to deal with their main occupation: the white slave trade and the drugs traffic aimed at the Brussels European Union. An occupied province, where the inhabitants live cooped up in ghettos, under the gloomy and empty eyes of the whole world, just like our poor monkey in its Swedish zoo.

But Kosovo is not lost!

NATO and its Brussels menservants have not bended the Serbian resistance, that has just given the entire world, a totally new example of courage, strength and determination.

The Serbs must know that they are not alone! The European Union, the United Nations, have still not acknowledged Kosovo and they never will! In the heart of Europe, Greece, Spain, Romania, Slovakia, Cyprus, have refused to give in, despite huge pressures on them.

Across the world, many other countries like China, India, Brazil, Kazakhstan, Argentina, Moldavia and many others are opposed to the independence of the Kosovo!

In all those countries, hundreds of thousands, millions of inhabitants support Serbia.

There is also Russia, the great benevolent Sister, who from day one, said that never ever it would acknowledge Kosovo. Russia, whose leaders, Vladimir Poutine and Dimitri Medvedev to start with, have decided to take their fate in hands. Russia, who proposes today to the Europeans, an absolutely choice for the survival of our civilisation and our populations.

Time has come for the Europeans to take their fate in hands, this future that is not towards Atlantic with NATO but is beyond Oural, through a gigantic military continental alliance with Russia.

The continental unit is the only space that will warrant the Europeans and the Serbs to start with, the possibility to live in peace and freedom on their land.

More than anything else, Kosovo must come back to its owners, just like Northern Cyprus.

It is time that Europe stops being an occupied land, whether by the Turkish army or by the American army, under the NATO flag.

On the 24th March in the evening I will not be physically in Belgrade but my heart and my soul will be with you, my Serbian friends.

The next morning, the fight will continue and will cease with the end of the Kosovo occupation!

More than ever tonight, I salute you and remind you my faithfulness oath to Serbia: