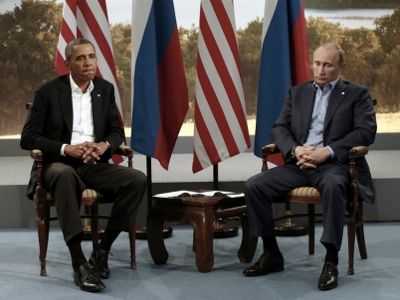 The relations between Russia the United States just keep getting worse, and this downhill trend seems to have accelerated over the last few weeks. Particularly, and obviously, since the Syrian conflict seems to be turning into an indirect war between Russia and the USA.

So the illusion of a «new entente» between Russia and the US hasn’t lasted. The last G8 summit was marked by the Syrian conflict, which clearly opposes Russia and the other powers in the group – with the USA, the United Kingdom and France in the lead. The Russian president, Vladimir Putin, clearly stated during the conference that » … it is not the Syrian people who are fighting el-Assad, but commandos, including foreign units, who are well-trained and well-armed (…) by terrorist organisations.»

Since only one step separates Europe from Qatar, it is not surprising that the «Friends of Syria» have now decided to support the Syrian opposition even more actively, by opting for a solution which promises to be increasingly military in nature. Paradoxically, it was John Kerry who made the toughest declaration concerning Russia, when he accused them of being the main instigators of the continuing conflict in Syria. Without a doubt, his declaration signals the end of the honeymoon between Russia and the United States, and it looks like the chill may last.

At their reunion in Doha, the «Friends of Syria» finally published a document which makes it clear that Bashar el-Assad will play no part in the transition in Syria once the terms of the peace negotiations are finalized, and in particular, that the delivery of arms to the opposition will be decided entirely by each individual country. Russia, which had been hoping that a conference (dubbed «Geneva-2») could help find a political solution to the conflict, is now faced with an even stronger and more determined coalition which includes the Western powers, Turkey, and the Sunnite powers of the Gulf. The question of Bashar El-Assad retaining power, and the participation of Iran (with its new president, who is actually a reformist) are the two main sticking points between Russia and the Western-Sunnite block which has formed on this issue.

Russia has therefore asked the United States to clarify its position, in other words, to choose between the political solution (Geneva 2) and the solution of military support for the «opposition» which has decided to continue the war to overthrow the current Syrian leadership — at whatever cost.

However, this diplomatic tension does not only concern Syria. On the 24th June, the United States threatened Russia and China with «consequences» for their bilateral relations, after the assistance given by the two countries for the exfiltration of Edward Snowden, the ex-CIA consultant who recently denounced the PRISM system. Edward Snowden is accused by the USA of the illegal transfer of information relevant to national security, and the premeditated transfer of secret information. Snowden left Hong-Kong, where he had been living for the last few days, to fly by Aeroflot to Moscow, prior to flying on to an unknown destination.

These threats from the USA arrive, curiously enough, at the same moment when Russia and China have just signed an enormous oil contract for a value of 270 billion dollars over a 25-year period. The agreement was signed between CNPC and Rosneft, whose director is Igor Sechin, a close friend of Vladimir Poutine. Rosneft has therefore taken place as the leader of the oil chapter of energy cooperation between Russia and China.

This collaboration is one element in a wider policy of diversification of Russian energy deliveries – Moscow is playing the Asian card in an attempt to balance Russia’s present dependency in terms of the European crisis.

This finalization of the oil partnership with China, when Sino-Russian discussions on energy cooperation have been static for a long time, is a further indication of Russia’s determination to open a «window on Asia«, a sort of historical replica of the «window on Europe» which was opened in the 18th century, symbolised by the construction of the magnificent «Venice of the North,» Saint-Petersbourg.