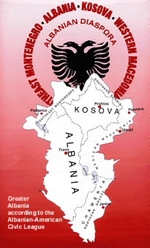 Wednesday, December 5, 2012, the Albanian Prime Minister Sali Berisha advocated granting Albanian citizenship to all Albanians, wherever they reside. This statement was made during a visit of the city of Vlora where the independence of the Albanian state was declared, only 100 years ago. At the time Albania had just liberated itself from Ottoman rule.


This declaration follows a separate statement, collective this time, that Sali Berisha had made with his Kosovar counterpart Hashim Thaci a few weeks ago, promising the union of all Albanians. The place was, I must say, well chosen since the vast majority of the inhabitants of Kosovo today are of Albanian origin, which has not always been the case.

During the Balkan War in 1913, Serbs still constitute the majority of the population. In 1941, Kosovo is attached to the Greater Albania (already) fascist Italian protectorate. After the war, Tito would prohibit Albanian immigration since Yugoslavia, according to him, could be strong only if Serbia were as weak as possible. In 1974, it is he who attributes to Kosovo autonomous province status which would be removed by Slobodan Milosevic in 1989, while the Serbs already composed no more than 15% of the population.
When in 2008 Kosovo declares independence, nearly a decade after the Western military intervention, few commentators call attention to the dominant «Albanity» of this new small state. On the contrary, it is a time of real celebration for that supposedly oppressed people who finally gained freedom. In most Western countries and the European Union, the recognition is instantaneous, without any question being raised about the treatment of the Serb minority and the future that awaited it, despite the terrible precedent of 2004, when Christians were victims of pogroms, burned down churches, and the violation of their most basic human rights. It is true that Europe, sorry the European Union, at that time had other priorities: the essential organization of gay pride in Belgrade.
It took only 4 years for the farce of Kosovo’s independence to finally emerge publicly. Only 4 years for the Albanian Prime Minister to prove the Serb nationalists right when they consistenly maintained that it was not Kosovars (the inhabitants of the Kosovo region being Serbs) they were facing but well and truly Shqiptars, in a new episode of the ancient conflict in the Balkans that has pitted for nearly 6 centuries the Orthodox Slavs against the sons of the Ottoman Empire converts.
Western support for the creation of Kosovo and hostility against Serbia may seem completely inexplicable. Yet from 1991 to 2008, U.S. strategists have been led by a single logic: the destruction of Serbia, to debilitate her as much as possible for the inevitable historical moment in the future when she would again turn to Russia. 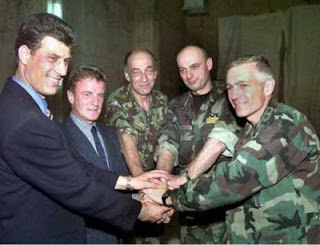 Of course, it was necessary at the same time to also devitalize Russia. If, from 1991 to 2000, a military and media war was waged against Milosevic’s Serbia with the aim of annihilating it, an economic and moral war was being unleashed against Yeltsin’s Russia. The crusade against the communist world has turned into a crusade against the Orthodox world, and essentially against its most sovereign political nerve center: Russia.
The theoretician of Russia’s containment in Eurasia, Zbigniew Brzezinski, said himself in 2007 that «After the collapse of the USSR, the main enemy of the USA will be the Russian Orthodox Church.» The creation of Greater Albania can probably be seen in this historical and geostrategic light. It is like tossing a new match, one that could create a spark and start a new fire in the Balkan inferno. This fire would result in the further weakening of Europe, but also deepen the destabilization of the Orthodox world (Macedonia, Greece, Montenegro, Serbia …) and curb its rapprochement with Russia. Indirectly, it is Russia’s influence in Eastern Europe that would be challenged, and therefore its rapprochement with Western Europe. In doing so, the United States would once again achieve their primary objective: to prevent a rapprochement between continental Europe and the Catholic and Orthodox worlds.